In April 2017 legislation was introduced that requires all organisations who employ 250 or more people to report their gender pay gap based on a snapshot of the workforce on the 5th April each year.

The gender pay gap shows the percentage difference between the average salaries of women and men across the entire workforce, irrespective of role. It should be noted that the gender pay gap is different from Equal Pay which measures whether there is a difference in what men and women in specific equivalent roles are paid. 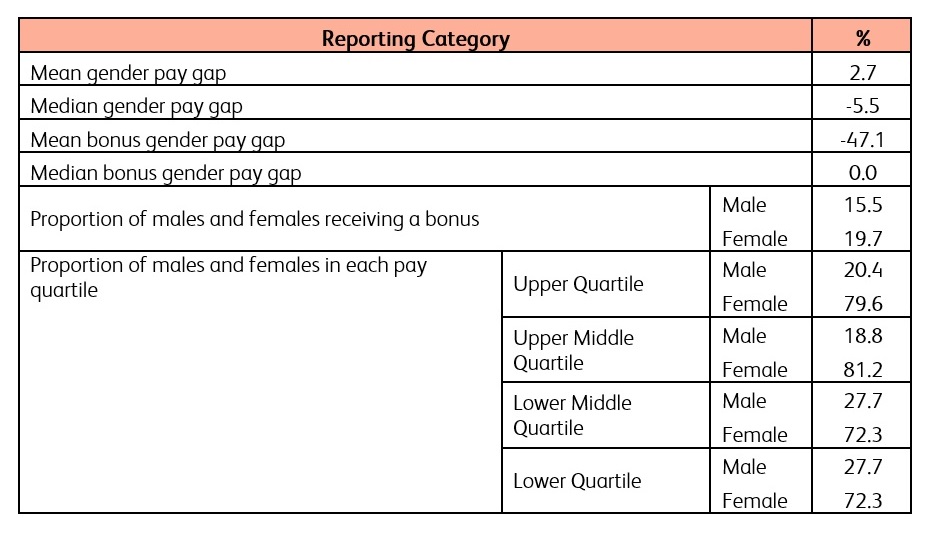 These figures have all been calculated using the mechanisms set out in the gender pay gap reporting legislation.

Walsingham Support employs significantly more women than men across its workforce with 877 total employees being in post on the snapshot date, of which 76% identified as female and 24% as male. This is a slightly improved reflection of the wider Social Care Sector which had a spread of 82% female and 18% male employees in 2017 .

This means that the average (mean) for women does come out lower when looking at the entire workforce because the overall number of people that figure is calculated from is so much higher. However, when you look at the mid-point (median) of each group’s pay then women come out much better with a 5.5% higher rate than men, which is what you would hope to see in a workforce of this distribution.

Overall, Walsingham Support’s figures compare very favourably against the Office of National Statistics (ONS) 2017 figures which reported the average mean at 17.4% and the average median at 18.4%.

As published by ACAS, there are roles traditionally associated with women that often pay less and Social Care clearly falls into that category when you look at the percentage of our female employees and the low pay funded across the sector at present.

Additionally, ACAS also report that 74% of mothers provide childcare time and as such are more likely to be working part time, which can also have a significant effect on gender pay gap reporting. Walsingham Support currently has 52% of its workforce working part time, of which 83% are female.

As can be seen from the statistics, a higher percentage of women than men received bonuses, which reflects the higher female population of the workforce.

Additionally, the median illustrates that the mid-point received for each grade showed an equal rate.

Walsingham Support has, throughout its 30+ years of operating, been fully committed to equality and diversity and has employed people according to the requirements of the role, not according to gender. We support flexible and part time working across all areas of the organisation, enabling more than half of our organisation to work on a part time basis to support their work life balance needs.

Walsingham Support is committed to continuing as an organisation that supports work life balance and by promoting this hopes to attract more men to its workforce.

Walsingham Support is also committed to the continuing challenge to improve low pay across the organisation and sector as a whole.

Walsingham Support also continue to provide development opportunities across the workforce to enable people who traditionally would not seek to progress, to be able to do so.

Finally, Walsingham Support continues to engage in initiatives to increase the number of men working in the sector in general.

I confirm that this report has been written in line with gender pay gap reporting legislation and that the figures within it are accurate.